André is an expert on seabirds, and has carried out research and conservation work for Hawaii’s three endangered seabirds, as well as consulting on seabird projects around the world. His extensive experience includes: Internationally, Andre has been involved in seabird projects in Papua New Guinea, New Zealand, Malta and the UK. Beyond seabirds, André has worldwide experience in conservation and biological monitoring, and is highly versed in a variety of survey techniques for passerines, raptors and waterbirds, as well as small mammals, large mammals, reptiles, and insects. As the Conservation Manager for BirdLife Malta, André produced the country’s first Breeding Bird Atlas, spearheaded anti-poaching activities and provided scientific data and expert advice to the European Union and the Maltese Government. André has a Masters in Conservation (Honors) University College London and a PhD from the University of East Anglia.  He is the lead or co-author of 28 scientific papers, and has written five books on bird and wildlife identification. Andre has a banding permit in the UK, Malta and Hawaiʻi. 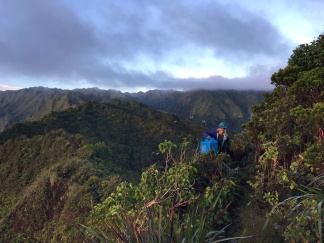 Helen Raine is an expert in conservation project management. Her most recent projects have included: In Europe, Helen managed the EU LIFE Yelkouan Shearwater Project, Malta’s largest conservation project; partners included the Armed Forces of Malta, HSBC bank, Malta Maritime Authority and international NGOs. Work included: Helen is also a writer and journalist, and has published hundreds of articles on a wide range of topics, particularly the environment and travel, including the American Birding Association’s Field Guide to the Birds of Hawaiʻi. She has a MSc in Conservation from University College London.

Marc has conducted 10 years of research quantifying avian collisions with infrastructure in concert with developing and testing solutions to prevent collisions. In collaboration with partners, Marc has innovated this field by developing novel monitoring solutions featured in Nature’s online magazine and has developed novel collision prevention technology.

Additionally, Marc’s research on seabirds and other taxa has taken him to a number of islands in the Pacific and Indian Oceans, the Canadian Arctic, and Antarctic where he has helped local teams initiate a powerline monitoring program, studied the indirect demographic consequences of nest predation, climate changed induced diet shifts in birds and Polar Bears, niche partitioning, avian disease dynamics, physiological indicators of health in wildlife.

Originally from Washington, Caitlin earned her B.S. in Biology at Whitman College. Growing up at the base of Mount Adams, she has always been very active outdoors and enjoys trail running, hiking, and mountain biking. She first started working on birds when she did her thesis research in Panama, studying the effects of human disturbance on bird populations in the Bocas del Toro Island Archipelago. She has held previous jobs working to restore beaver and fish populations in the Pacific North West.

Caitlin is excited to be the crew lead fot the IMMP staff and contributing to the conservation of Kaua‘i’s seabirds. In her off time on the island, she is learning to surf and exploring the trails!

Hannah was born and raised in Michigan but has since lived and worked in many states across the country. Attending Texas State University for her B.S. in Wildlife Biology, Hannah immediately realized her love of birds, quickly becoming involved as a technician for avian related studies under a doctoral student.

After college, Hannah worked with seabirds on a small island off the coast of Alaska and the following year came to Kaua‘i to continue conservation for multiple seabird species. Hannah is honored to be a part of the ARC team and carry on with helping to preserve many of the endemic and threatened species that Hawaii has today.

Jason Gregg is a field biologist and writer who has worked with leading conservation organizations, non-profits, and universities around the world. He has authored two scientific papers and over a dozen popular journalism articles for Audubon Magazine, Mongabay, and Hakai Magazine.
Jason is delighted to join the ARC team on Kauaʻi in 2021, where he hopes to apply his passion for field work and endangered species conservation. He is fascinated by the incredible seabirds of Hawaiʻi and excited to be doing the work that helps them thrive.

Born and raised in Maine, Bobby has become extremely passionate about working to conserve endangered species and graduated from University of Maine Orono with a B.S. in Wildlife Ecology in the fall of 2019. He has worked with mammals, amphibians, reptiles, but has a soft spot for seabirds after working among tern and puffin colonies in his home state.
Before ARC, Bobby worked with Save Our Shearwaters on Kaua’i in a rehabilitation setting where he learned about the unique challenges faced by Hawaiian seabirds and other native species to Hawai’i. Bobby is thrilled to be a part of the ARC team and to continue working towards to conservation of the endangered Hawaiian seabirds that he has come to love.

Growing up on the coast of California Vinny developed a strong bond and affinity for the ocean and the species which call it home. Graduating from Humboldt State University with a B.S. in conservation and management, his love and passion for seabirds took root in the Redwood Coast. Vinny is stoked to be a part of the ARC team and continue conservation efforts for some of Kauai’s striking native seabirds.

Trysen has spent the last two months with ARC painting larger than life murals of our native waterbirds and seabirds as part of the ‘Cat Safe, Wildlife Safe Kaua’i Project’. The project, which was supported by the County of Kaua‘i’s ‘Rise to Work’ program, uses street art to introduces Kaua‘i residents to the endangered birds that live here, and to the idea that both cats and birds are protected when residents keep pet cats indoors and refrain from feeding outdoor cats.  You can see more of Trysen’s work here.